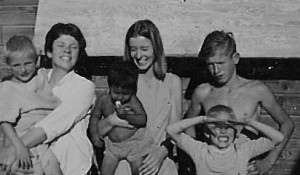 We always said we’d grow old together. We did…we just didn’t notice.
For we whose glory days were arguably the 1960s, becoming old seems an illusion.
We were stardust, we were golden, we are billion year old carbon……….but time comes when you have to get yourself back to the garden.

I wasn’t ready for her to return that day, this year. Why didn’t I know? Why wasn’t I there?
Because in the mythology of today’s world of “50 is the new 30 ,” we were still only late middle age.  Weren’t we? I denied entrance to the harbingers who said otherwise. I was still out there flying…..on the road again….out of reach. And now I’m left behind. My memories have been on full dress parade.

She was the sunshine of our lives… her caring self, always ready for a little adventure.
When I asked Karen to take a road trip with me, to deliver my mother’s ashes to the Sangre de Cristo Mountains in New Mexico, she didn’t hesitate. We visited her friend in Taos Pueblo for guidance. We went to the mountains, above the high village of Truchas, past the studios of the Cordova weavers, beyond the paddock of painted ponies and of goats, above where the owls were calling, above where the water flows from the high peaks to the Rio Grande and then to the gulf and all around the world. We are stardust.We were on the journey already. The magical mystery tour was already taking us away.

We returned to Washington, the car vibrating with song: I Heard it on the Grapevine. Marvin Gay. Stories she’d never told, the glories and pains of our lives. Hours on the highway allows for that. Once, she imagined she saw her brother’s face in the clouds. Like Thelma and Louise we could dream alternative lives while driving free and out of time, hurtling through deserts at 75 miles per hour. We walked and rode through Cornwall, watched the dolphins play near Land’s End and visited her ancestral farms. Cornwall was soon after 9/11 and we wondered if the anthrax scare would keep us in Britain forever. We spent some days in Leamington Spa to visit an eccentric friend of her Dad. It was all fodder for an imagined future we laughed about.

It was not so farfetched. In Cornwall, an ancient historian who was Victorian in dress and manner fell in love with her. Everybody did.

A woman in Uzbekistan ran across the plaza in Tashkent and asked her to please come home with her…she would make her a dinner and sew her a dress. It was like that. People felt her spirit.

We watched the first walk on the moon in 1968. From the deck of her parents’ Hood Canal cabin we gazed at passing satellites, still in their first decade of circling the earth. Incredible to us, these stars with such grave intention moving above us. We suffered the 1968 murder of Martin Luther King and the assassination of Bobby Kennedy. We marched in the streets of Seattle during Vietnam.

And we grieved when her brother Evan, a Vietnam veteran, died.

We marked each of these heart wrenching moments with tears but never abandoned hope. They were all times for rededication of our life work.

We travelled to Camp Grisdale, in the mountains, with her Dad. It was the last of the old logging camps. We watched the men in tin-pants take down surviving giants of the forest and joined the fallers in lunches of T-bone steaks .

We lived in farm labor camps and went to Delano to join Cesar Chavez and Dolores Huerta. Viva la Huelga, we sang. Long live the strike. Sam Martinez, Tomas Villanueva and others in United Farmworkers helped us forge a perspective on our work and how anthropology was nothing if not political. We worked with her beloved, Subiyay, Bruce Miller, to document the basketry art of Mrs. Pulsifer and Emily Miller. Once we uprooted an entire Oregon Grape and presented it to her to peel for her yellow dye. Bruce brandished it like a first kill offering. “You only need a little bit,” she said as she chuckled at our trophy. We fetched bucket after bucket of the wrong mud for the black dye. Mrs. Pulsifer was patient. We were humble beginners in this work of life. Yes, we all got it wrong sometimes. But we learned. And that is part of the being human.

And there was fun, abundant fun. We saw Hair in San Francisco. We flung our own hair at Eagles Auditorium in the sweet glow of watery light shows and. pulsing strobes. The Doors, Cream, Pink Floyd. Country Joe and the Fish. University AVE, Helix magazine with its psychedelic rainbow covers, all part of the fabric of our lives. I was there when Dex and Karen married and with the McCulloch family for exhilarating after hour repasts of pizza and song. She was dedicated to family: to her Aunt (Täti) and Uncle Hugh, just a short Boston Whaler trip across the canal and famous for their sauna and Russian music and vodka; to her cousin Alice, their daughter, for whom she cared through catastrophic illnesses; to the James family….the annual picnic, the newsletter and those encyclopedias brought all the way from Cornwall.

And then there were the births of her adored sons and grandchildren…and her hopes for their lives and wish that they would appreciate the treasured objects, like her grandmother’s needlework, with which she surrounded herself, she, the self anointed curator of the family legacy.

Karen… human kindness over flowing…so present in all her work and relationships….and a passion for justice and for her dear dear friends.

I was numb when I heard Karen was gone…she didn’t warn us…or did she? When I talked to her sons, one said, I swear she left us messages in between the pages of her inevitable, ever present stacks of papers. I didn’t doubt it. When I walked in Olympia for the first time after she had left us, the Olympic Mountains were as clear as I’d ever seen them from the boardwalk along Budd Inlet. I had walked that walk for fifty years but I saw for the first time, from there, the Traveller….a formation that is visible when the snow lays itself between and below the crevices and declivities that make that feature stand out. The Traveller. I saw her cloak, her staff, her hat and realized that our dear traveller was on her way and would always greet us and the crows and the dog friends and all the humans and other creatures who ever knew her from high on those beloved mountains, the mountains she gazed at all her life.

But even that assurance does not relieve the pain, does not sew the rent in the fabric of our lives, does assuage the feelings we will have when we miss her at the table, on the boat or on the telephone…we will feel it….at unexpected moments…again and again and that’s just how it will be…

We didn’t go back to the garden together….but today we celebrate her journey….and know that she is teaching us, showing us and always will be.
One year when I was away A giant cedar tree that had stood for over 100 years near where my house is fell. There must have been a tremendous silence when it settled. I mourned that tree. It was a tree that I looked at everyday. It was a cradle for birds and a home for lichen and moss and generations of squirrels. It overlooked the bay and reached for the sky. But when I came home, everything was different with that tree gone. There was a emptiness and confusion among the creatures. But where roots had been I dug in rich, loamy soil and planted a garden and now the open sky lets the sun shine on the garden and it is nourished. Deer come and help themselves, and the raccoons and the crows…the crows now perch with eagle and heron atop a nearby madonna and call out and fuss and live out their lives with memories of the old cedar. I like to think they tell their children…I like to think they pass her story on and honor her and thank her for the sheltering strength of her life, for the garden that grows where her feet once stood.

Across the Bay at sunrise I often see Mt. Rainier where another friend was killed in an avalanche. And in my yard are plants that honor other beloveds. They bloom in their season and remind me of them and of the fragility of life. All is impermanent means more and more.

I will plant something for Karen…something that reminds me of her smile…something that a cat would like to wind itself around to listen for her call….or a dog to pounce from……
Something.

LLyn De Danaan is an anthropologist and author. She writes fiction and nonfiction. Katie Gale: A Coast Salish Woman's Life on Oyster Bay was published by the University of Nebraska Press. She is currently a speaker for Humanities Washington.
View all posts by Llyn De Danaan →
This entry was posted in Essays, Memoir, Uncategorized. Bookmark the permalink.